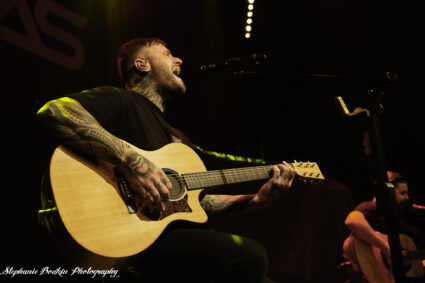 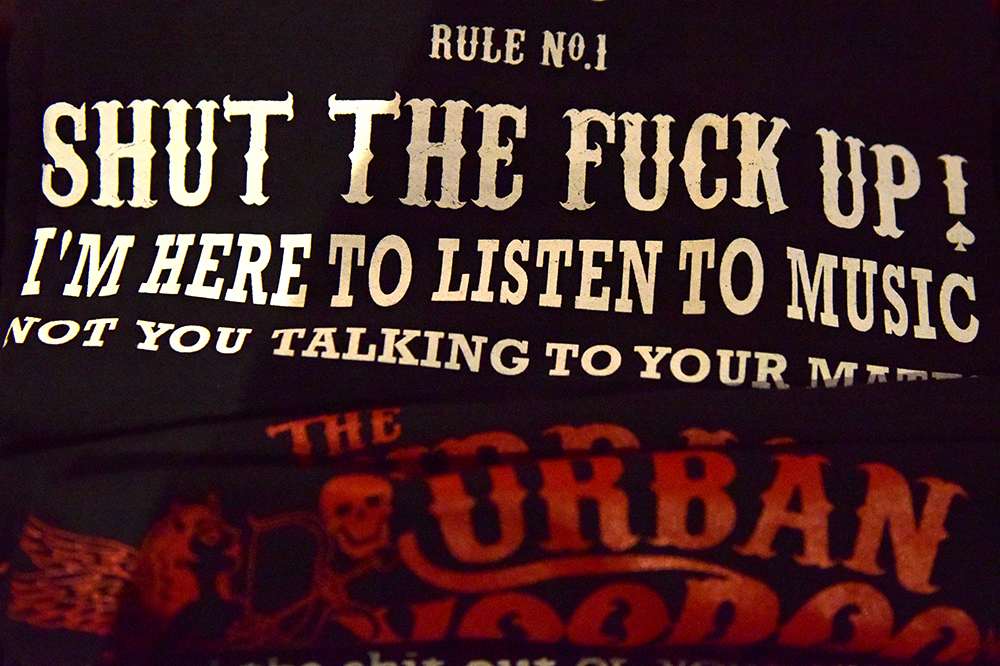 When the Darkness’s Rock n Roll Pantomime roll’s into town you know that you’re in for a treat. Rock City is sold out, in fact we get told later in the night that Nottingham was the first venue to sell out when the tour dates were announced and tickets released.

Support for the tour has been Lancashire’s very own ‘Rock n Roll Muppets’ Massive Wagons. Baz and the boys have jumped in taking the place of Steve Harris’s British Lion who pulled out for whatever reason!

Being up first Baz comes out like he’s been wired straight into the mains, his energy is of the scale as he races around the stage, posing for the togs with his photogenic poses, often too close to the camera lens to focus on.

Throwing his hair back, he’s on fire pointing into the crowd as they race through numbers like opener ‘Fe Fi Fo Fum’ and ‘In It Together’. There’s not a lot of room at the front of the stage but the boys give it the usual treatment. It’s only a short set, so on with it with ‘China Plates’ and ‘Pressure’ from the House of Noise album. Clad in trademark Dennis the Menace top, Baz comfortably commands the stage. As he points and sings often with the top of his head to the crowd, the packed house is bouncing along, singing the words as they go.

‘Banging in your Stereo’ follows, that was the one with the LEGO Baz video follows and it’s a lot more animated, the grinding intro fires up marking the intro to ‘Ratio’ and we’re off again, drums banging out in a solid beat, a great fan favourite given a ‘live’ edge has the crowd bouncing.

Set closer we have head down rocking, ‘Back to the Stack’ a full-on high energy closer. The crowd get the full treatment, with that familiar Wagons sound.  It’s been a great set, a bit too short for the die-hard Massive Wagons, but they’ve acquitted themselves admirably yet again. I’ve yet to see a poor show from these great bunch of lads.

The Darkness eventually hit the stage, after all some have been here since early evening waiting for Justin, in fact a lucky few had the privilege of a covid secure meet and greet earlier in the day. I have it on good security authority that it’s the best meet n greet he’s ever been security for. Nice one!

Justin has come on stage looking like a stunt double for Kenny Everett’s Sid Snot, the leather cap he soon loses and his long flowing locks become the envy of many a girl in the crowd.

Starting off with the opening track to the new album, ‘Welcome Tae Glasgae’ we see Justin on form straight out of the blocks, flying around the stage in a leather waistcoat and white Pants, Les Paul hanging low he bounces up and down as he plays and swops sides. ‘One Way Ticket’ is next with Frankie Poullain on cowbell. You can never have too much cowbell. Justin complete with falsetto voice rips this one out, the crowd only too willing to join in.

The set list has a few off the new album, something that Justin acknowledges, the crowd as in any gig want to hear the old treasures so to for fill that we get, ‘Growing on Me’ a great early track which has the crowd bouncing along, something Justin again acknowledges. ‘Black Shuck’, ‘Heart Explodes’ from Easter is Cancelled. ‘Japanese Prisoner of Love” and ‘Solid Gold’ from Pinewood Smile. ‘Barbarian’ once again see’s Justin in fine form as his voice cuts through in the higher register as he hills this song from the 2015 Last of our Kind album. ‘I Believe’ takes us to the set close, this 2002 release has the crowd bouncing arms aloft. Justin and the band have smashed it.

A brief break see the band back, a costume change has occurred, Rufus is on first as a Christmas tree, he stops centre stage and throws a pint of beer at himself, the crowd are in hysterics, he then collapses up the drum riser, he obviously can’t see where he’s going. Justin walks on in a slinky Santa outfit with plunging neck line it looks like its straight out of an Ann Summers catalogue, to be fair he looks good in it. Frankie, er well what’s he wearing . . . is it a Christmas turkey or an ugly sister’s inflatable costume? I look around and the crowd love it, cheers, and whistling a plenty. Dan is somewhat subdued in comparison with a blue Xmas jumper, we have another Santa on acoustic and a lobster on cowbell?

So, to finish the set off we have ‘Mistletoe and Wine’, the Cliff Richard classic, and Wham’s ‘Last Christmas’ the latter see the crowd take over the singing duties as the band dance around playing the song. Rufus, or Christmas tree, on drums must be soaking inside the costume, but he’s carrying on regardless. With a brief remark about Gary Barlow’s Christmas song which goes down like a lead balloon we have the Darkness’s Christmas song complete with confetti drops. ‘Bells End’ goes down a treat. After telling the crowd to put the phones away and enjoy the moment, which they astonishingly comply too, the floor is bouncing, the full-on party atmosphere has been brought to Nottingham and the crowd are loving it.

The Darkness never fail to entertain, they may be a marmite band but there’s no disguising the energy and connection they have with their fans.

Let’s have them back again next year if they’re not at a Private Party at No 10. Awesome! 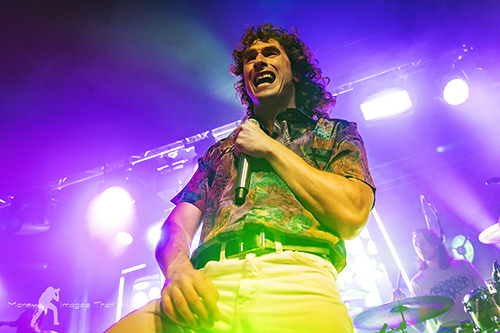