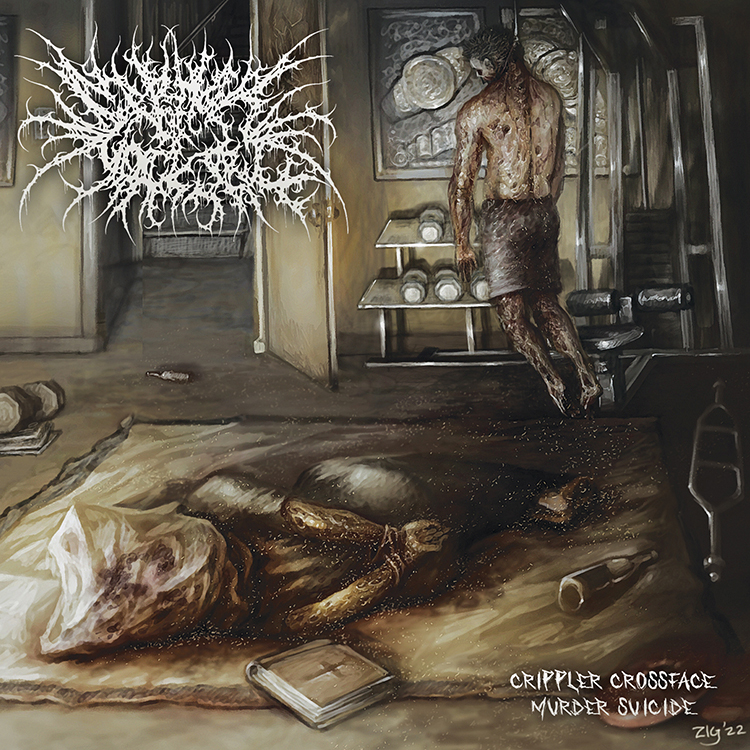 Walking a tightrope above a lava pit of uncontrollable rage; tendrils of liquid hate reaching up to you, straining to pull you down into the boiling, all consuming fury. Distorted faces form in the magma, twisted apparitions that mock and beg and plead, tempt and challenge…and as the chemicals scream through your veins you want nothing more than to leap into their searing embrace, to feel the release of the torturous pressure that threatens to tear your mind apart. It would be such sweet relief to sink into the red mist, to let your vision become painted in blood and to tear, rend, beat and destroy, to crush, to break, to batter and kill…

Sermon Of Mockery are an unending scream of desperate anger, a roar of defiance in the face of insurmountable pain and frustration, the sound of the dam bursting and unleashing a torrent of raw, scalding, chaos and emotion. Debut EP Crippler Crossface Murder Suicide, named for infamous wrestler turned steroid fuelled murderer Chris Benoit, explodes in an onslaught of violence from the very first second of opening track ‘The Snakehead Epidemic’. Blast beats fall like a rain of hammer blows from the fists of Ukrainian skin-beater Lev Kurgansky (Horror God, Ezophogothmia, ex-Fleshgore etc) while the riffs thrash and twist like demented serpents. The inhuman voice of renowned front man Johnny Paoline (Mortal Decay) vomits bile and blood in an acidic shower over the four ghastly aural deformities that comprise this release of utter brutality and disorientating carnage. By the time the wild insanity and freakish complexities of ‘Dr. Heiter’s Creation’ have finally fallen silent listeners will be left in a state of shock. An experience akin to immersing your face in boiling oil, Crippler Crossface Murder Suicide is also bizarrely addictive and you’ll soon be crawling back on broken limbs for another ride on this horror train of extremity.

A tsunami of savagery of titanic proportions Sermon Of Mockery were never going to escape the all seeing eye of Comatose Music – and the world’s premier purveyors of musical devastation will unleash Crippler Crossface Murder Suicide on October 7th. Once you’ve tasted this feast of ferocity, this banquet of torture and confusion there will be no going back. When your senses have been brutalised by Sermon Of Mockery nothing else will ever seem truly extreme again.