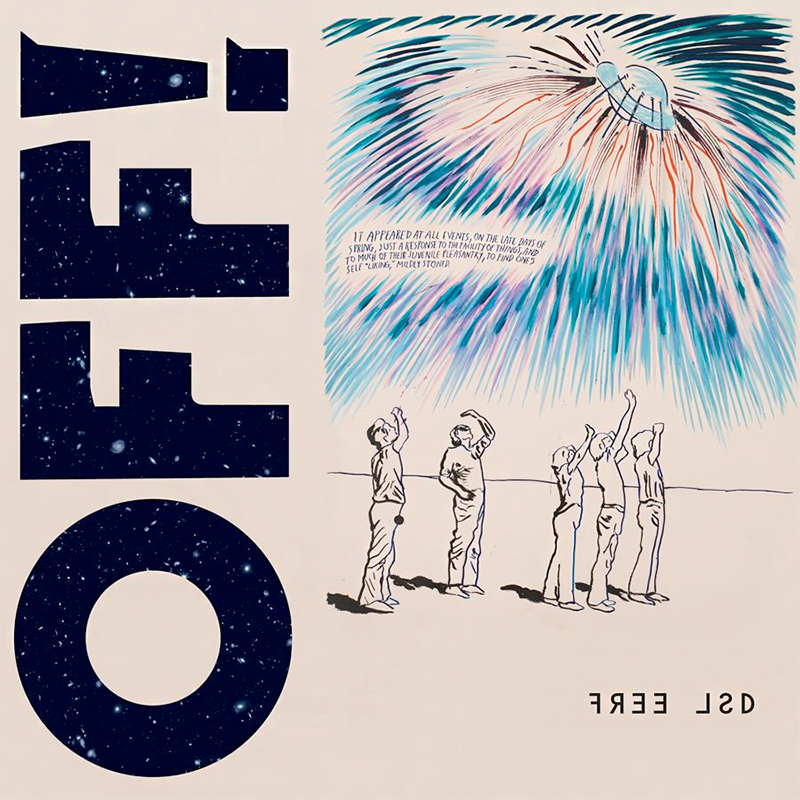 PUNK SUPERGROUP WITH MEMBERS OF CIRCLE JERKS, THUNDERCAT, …AND YOU WILL KNOW US BY THE TRAIL OF DEAD, AND MORE TO UNLEASH FREE LSD VIA FAT POSSUM ON 30TH SEPT, PRE-ORDER NOW

OFF!, the punk think tank helmed by Keith Morris (ex-Black Flag, Circle Jerks) and Dimitri Coats (ex-Burning Brides), have just announced that their first new full-length in eight years is slated for a 30th September release from Fat Possum, followed by a full tour of the US (see full dates below). FREE LSD effectively hits reset on the band, as the injection of new energy into their signature high-anxiety sound bonfires via new drummer Justin Brown (Thundercat, Flying Lotus, Herbie Hancock) and bassist Autry Fulbright II (…And You Will Know Us by the Trail of Dead) pushes the concept of punk into another frenetic dimension. The effect is palpable and volatile, adding a new swing to the music’s incendiary thrust; perhaps most evident on album cornerstone “War Above Los Angeles,” shared today alongside a cinematic music video starring David Yow (Jesus Lizard), Don Nguyn, Chloe Dykstra, James Duval, D.H. Peligro (Dead Kennedys), and more.

While the new lineup brings an experimental flair to the table, catapulting their subterranean howl into the orbit of Sun Ra and The Stooges by way of Coats imbibing a number of songs with layers of electronics amid explosions of percussive virtuosity from Brown and bursts of guest saxophone from Jon Wahl (Claw Hammer), Morris sounds timeless as ever, unleashing torrents of no-nonsense screeds across 90 second furnace blasts like “Kill To Be Heard.” Speaking on the album’s distinctly revitalised sound, Morris states: “After making music for as long as I have, it was time to use a palette that includes lime green, turquoise, and magenta instead of the typical colours and shades that were involved in all of the other breakneck and car chase scenarios. Miles Davis with Herbie Hancock and the Headhunters as opposed to Milo Goes to College.”

The “War Above Los Angeles” video offers the first taste of the project’s broader multimedia ambitions: over the past couple of months the band has been shooting and editing a feature film, FREE LSD to accompany the record. Coats explains,“Since thinking of the album as a soundtrack to a weird sci-fi movie gave us permission to experiment, and the film explains, in a fantastical way, the creation of the album, they both go hand in hand as an overall art project.” OFF! is supercharged for takeoff in what has now been confirmed as humanity’s new year zero.