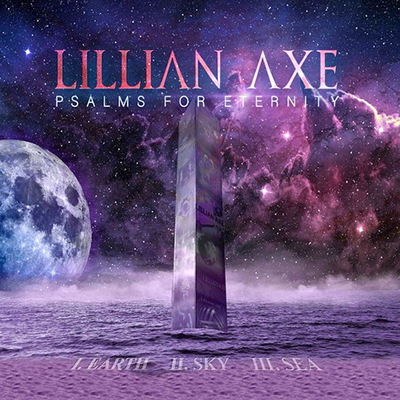 ‘Psalms For Eternity’ by Lillian Axe is released as a 3CD Digipack on 6 May 2022 by Global Rock Records [GRRBOX002]. ‘Psalms To Eternity’ brings together, for the first time, tracks from all previous Lillian Axe releases in one comprehensive anthology. All tracks that feature here were selected by Steve Blaze himself, who added in several bonus unreleased tracks, making this an essential part of the Lillian Axe discography. The album has been put together with a loosely thematic approach, CD1 is ‘Earth’, CD2 is Sky’ and CD3 is ‘Sea’. A brand new Lillian Axe album ‘From Womb To Tomb’ will be released in late Summer 2022!

‘Psalms For Eternity’ is sure to be welcomed by the band’s army of fans ahead of the new album release – Lillian Axe maintain a loyal following worldwide and tour frequently. Steve Blaze was recently personally inducted into the Louisiana Music Hall Of Fame, the band had already become the first hard Rock act to be accorded this honour.