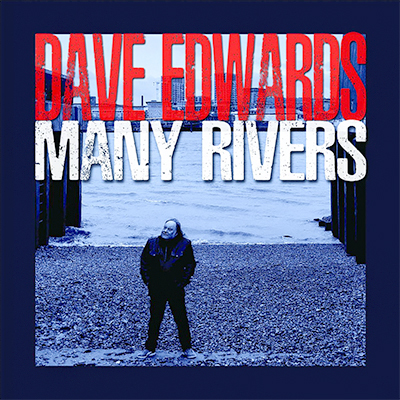 Cadiz Music are delighted to announce the release of the compilation ‘Many Rivers’ from Dave Edwards on CD [CADIZCD205] on 24 June 2022.

Who, you may ask?  Well, here’s who. Dave ‘Spud’ Edwards is possibly one of the finest guitar player/singer/songwriters ever to have come out of London. Really. Hailing from the East End, Dave has been the leader of such bands as British Isles, National Gold and Ramrod (with Rory Gallagher) as well as being the driving force behind legendary London rockers Remus Down Boulevard along with his good friend, Iron Maiden’s Dennis Stratton.

Culled from a treasured archive of previously laid down tracks, ‘Many Rivers’ also includes brand new cuts recorded in collaboration with Mick Geggus and Vince Riordan from the Cockney Rejects. They were first introduced to the talents of this 5’ 3” virtuoso back when RDB were the house band at the East End’s answer to the 100 Club, the legendary Bridge House, back in the ‘70’s. This collection features a host of Dave’s pals from the ‘70’s 80’s and 90’s, including Ted McKenna (Sensational Alex Harvey Band / Michael Schenker Group) Gerry McAvoy, Rod de’Ath  (Rory Gallagher Band) and Clive Brooks from The Groundhogs.

It was Geggus who first identified the unmistakeable quality of Dave’s back catalogue after he and Dave had found dozens of old reel to reels and cassettes. They turned the analogue tapes over to Iron Maiden soundman and live producer Tony Newton (another longtime friend of Dave’s) who began the task of transferring them into digital form. Later Andrew Thompson from Sound Generation completed the mastering process and hey, presto, the result is the important and immensely satisfying body of work that you are about to feast your ears on.

Clapton, Page, Beck and other luminaries may have grabbed all the headlines back in the day, but for those that know, the little guy sweating over his craft in the pubs and clubs over the past five decades (and still going!) was, and is, the equal of them all.

Heck, he even gets a Christmas card from Brian May every year!

Even now, Dave Edwards is active on the club scene all over the southeast of England, delighting audiences with his peerless tone whilst somehow finding time to build his own much sought after range of bespoke ‘Edwards’ guitars from his little home by the Thames in the East End. Hopefully ‘Many Rivers’ will bring him the recognition he so richly deserves.