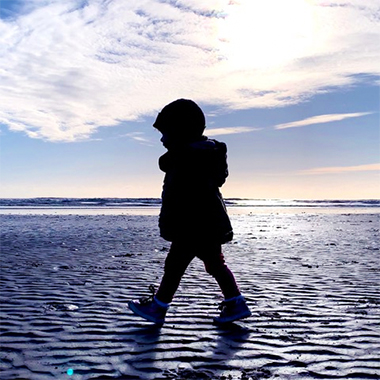 STREAM ON ALL SERVICES HERE || WATCH THE OFFICIAL VIDEO HERE

TAKEN FROM FIFTH ALBUM: A MATTER OF LIFE & LOVE – OUT NOW VIA XTRA MILE RECORDINGS + UK DATES WITH LESS THAN JAKE – THIS SPRING.

The new single is a record all about the greatest things in life, this track lends a tender tribute to the newest addition to the Skinny gang.

Introducing Bonny and the song that she inspired, her dad and frontman of Skinny Lister Dan Heptinstall says:

“After recently becoming a parent, it felt kind of inevitable that a song would be spawned from such an emotionally potent experience. Though the song is blatantly inspired by having a child, it’s fundamentally a song about returning home from travels to a loved one. So it has a universality that can just as easily apply to any relationship.  Like the title track of our new album A Matter Of Life & Love, the song is essentially about recognising that despite all of our searching and far reaching ambitions. Sometimes the things that really count in life are a little closer to home. The song is a gentle little reminder to treasure those things.”

Standing as a moment of tranquillity and reflection amidst the playful folk/punk ruckus of their latest album, ‘Bonny’s Eyes’ sees Skinny Lister tuning into their traditional roots to summon one of their most humbling, harmonious ditties to date. Blending lullaby-like vocals with twinkling acoustics, the Skinnies are also joined by friend and respected folkie Roger Wilson, who lays down the track’s flourishing fiddle sections.

‘Bonny’s Eyes’ is accompanied with an official video that finds the real Bonny making her acting debut. Echoing the sentiment of the lyrics with sweet-natured visuals, the video captures Bonny’s innocent curiosity and natural fascination as she revels in the simple wonders of a day out. “On a purely personal level – it’s really nice to be able to capture a precious moment in time like this.” adds Dan. Watch the video here:

‘Bonny’s Eyes’ follows previous singles ‘Damn The Amsterdam’ (which saw the band team up with The Longest Johns), plus album title-track ‘A Matter Of Life & Love’. Described by the Folk/Punk stalwarts as a collection of tracks that “really matter to them”, A Matter Of Life & Love is an album that pulses with blood, sweat and cheers. The distillation of everything that has seen the world fall for Skinny Lister’s charms, it swings from ska to rock, to folk-punk and traditional shanties, over the course of its 12 eclectic tracks. A record that celebrates all the best things life has to offer, it is also the first to be made, mixed and produced entirely by the band themselves.

Completing a run of SOLD OUT UK Shows over Winter in support of the album, Skinny Lister are now getting ready to step-up to some major stages in support of pop/punk heroes LESS THAN JAKE on their Spring UK Tour. The band will also be embarking on a short leg of German headline shows this Summer. Tickets for all dates are on sale now.

TICKETS FOR ALL SHOWS ON SALE NOW: https://skinnylister.com/live-shows/