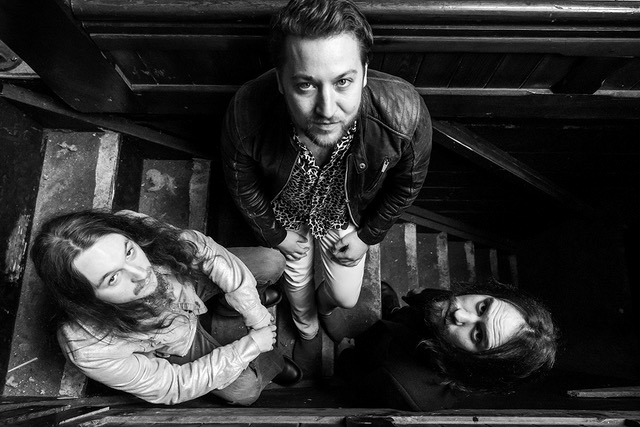 Hitting the ground at pace this January – MEXICAN DOGS – are back with the electrifying new single: “Run, Run, Run”.

Blasting away the cobwebs, the trio deliver an instant hit of retro-shaded, riff-rollicking Glam Rock for the good-times. Landing like the Black Sabbath / T.Rex collaboration that never happened, Mexican Dogs resurrect the rock’n’roll spirits of yesteryear and breathe new life into the sounds that defined their legacies.

While holding a torch to their greatest influences, “Run, Run, Run” would also prove a pivotal moment in lighting the way forward for the Mexican Dogs as a band. As frontman Gaz Wilcox says of the track:

“This song has the ghosts of sounds from past times with the idea of bringing it to a new era. This piece was the very first finished song that we made as Mexican Dogs! It kinda set the tone of how we wanted to sound as a band and from this we created a solid foundation and found inspiration to materialize more.”

Recorded at 3rd Planet Studios in the band’s native Liverpool, “Run, Run, Run” was produced by the esteemable Andy Fernihough who assisted in coaxing out its Classic Rock charms.

The single follows the rip-roaring success of debut single “You & I”, which has now surpassed 40k streams on digital services and continues to rise rapidly.  With a full 4-track EP planned and coming soon in 2022, fans can get their hands on early physical copies on CD and vinyl via Bandcamp here: https://mexicandogs.bandcamp.com  A global digital release will also follow.

Following packed-out, wall-to-wall shows in both Liverpool and London over the Winter, Mexican Dogs will be cutting their live teeth in 2022 with an upcoming gig at Liverpool Arts Club next month. Tickets are on sale now, with full dates and details included below.

With an earth-splitting sound and uncompromising attitude, Mexican Dogs are the Liverpool trio of Gaz Wilcox (ex-Bribes), Carl Rooney and Sonny Winder-Rodgers over the summer of 2021. Tapping into the seminal sounds of T-Rex or Led Zep and re-routing them via the high octane thrills of modern day titans like The Black Keys or Royal Blood, Mexican Dogs balance rock classic and contemporary on an exhilarating knife-edge.

Fronted by ex-Bribes man Gaz Wilcox, the Dogs’ vocalist and axeman has been playing guitar of a fine pedigree since the age of 9. Cutting his teeth at live shows only a year later (including a Beatles charity show at the Empire Theatre), the singer has honed his talent at all of the finest live haunts in his native Liverpool and beyond, performing in a string of bands including Eutopia, The Verdict (who won the UK Battle of the Bands, played a gig in The Houses of Parliament and also played in New York with The Enemy and Reverend and the Makers), and later Bribes. Earning a formidable live rep with major gigs at the Liverpool O2 in support of Electric Six and at Sound City, the band earned multiple plays on BBC Introducing before going their separate ways due to creative differences.

Rekindling his passion for music following a year away, Wilcox formed Mexican Dogs upon meeting drummer Carl Rooney (who has toured with greats like Echo & The Bunnymen, Iggy Pop, The Hives, and also performed at Glastonbury) and young bassist Sonny Winder-Rodgers. Feeling enlivened by their “happy-go-lucky vibe”, skill and enthusiasm, the trio discovered an instant connection. Creating music quickly and with ease, they began hatching plans for the bold, noisy future together.

Signed to the rising indie imprint Fretsore records only six months after their formation, Mexican Dogs created a streaming storm with their acclaimed debut release “You & I”, setting them up for a string of SOLD OUT live shows in its wake. Now breaking into 2022 with a killer follow-up track, “Run, Run, Run” is the thunderous sound of a band who are going places fast…