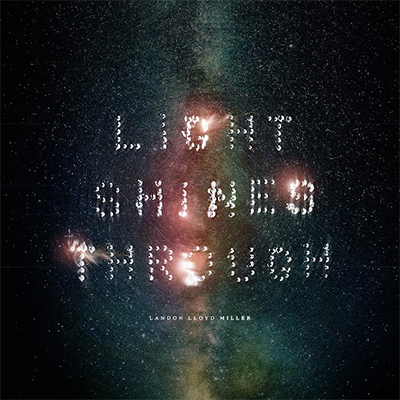 STREAM ON ALL SERVICES HERE / ORDER ON CD & VINYL

‘Light Shines Through’  the debut album from LANDON LLOYD MILLER is officially OUT NOW.

STREAM THE ALBUM IN FULL ON ALL SERVICES HERE
Released via the Twin Mesa label, the Texan singer-songwriter, ex-The Wall Chargers vocalist and all-round creative embarks on his solo career with flying colours.

Receiving early praise in the USA from NO DEPRESSION, they hailed the album as “nine stormy tracks in under a half-hour, racing from jangly, down-home rockers to searing, late-night ballads”. GLIDE added that “Light Shines Through” manages to be both refreshingly original and reliably familia. It’s a remarkable debut”. This side of the pond, THE PETERBOROUGH TELEGRAPH praised Miller’s debut as “a quality album, which shows his talents for ballads and rootsy rockers” (8/10). AT THE BARRIER stated that “anyone who enjoys intimacy, subtlety and a unique expression of the American music of the 20th century will certainly find lots to enjoy on ‘Light Shines Through’”.

The album follows recent teaser tracks, “Light Is Growing” (a song praised by Americana UK as “an uplifting dose of positivity”) and “Feel It Again” (championed by God Is In The TV for its “air of hope and positivity as it barrels along with a spring in its step”), as well as latest single “Bluebonnet” which arrived with a cinematic video directed by Evan Falbaum.

These sublime singles sit neatly amongst 9 other tracks of equal quality that comprise ‘Light Shines Through’, Landon’s debut solo outing. Taking inspiration from folk songs, murder ballads, country classics, and everything in between, Landon offers a suite of songs influenced by his Texan roots and glued together by his unflinchingly biographical lyricism. This is a diverse record of confessional piano ballads, cinematic roots rockers, and plenty of troubadour soul. Landon creates an album about vulnerability and strength, hope and darkness; with the ultimate message that light will always shine through.