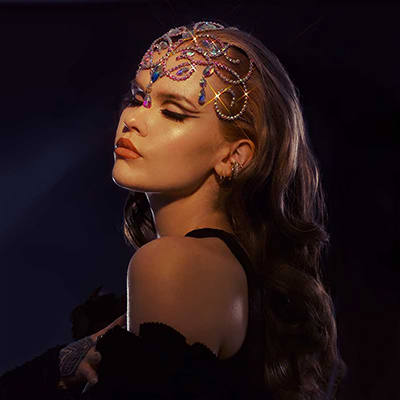 PRE-ORDER THE ALBUM FROM: WWW.INAFORSMAN.COM

STREAM THE NEW SINGLES “DON’T LOSE TODAY” & “ONE NIGHT IN BERLIN” FROM HTTPS://MUSAIC.BIO/INA-FORSMAN

A voice is always a voice. No other instrument in the world of music can be embraced by a true artist as unequivocally as human singing. The voice is the acoustic union of soul and face. If an extraordinary voice can slip into different guises and can communicate extraordinary stories, then something special is guaranteed. Ina Forsman’s new album is such a thing. All There Is, the third studio album from Ina Forsman, is a multi-faceted affair. It is profound and exudes Ina’s powerhouse vocal vulnerability.

Her new singles Don’t Lose Today and One Night In Berlin are out now.

Watch the visualizer for the new single One Night In Berlin – https://bit.ly/3LDPc5Y

Ina Forsman herself describes her music as cinematic soul. On the one hand, her songs are influenced by the soul of the 1960s and 1970s and give undisguised insights into mental states. On the other hand, they feature dramatic plot threads, an explosive colour palette, and character.

On the Berlin-based Finnish singer’s sophomore album Been Meaning To Tell You (2019) and her eponymous debut album Ina Forsman (2016), Ina presented herself as a promising vocalist, influenced by her role models. On the new album All There Is she comes into her own. The isolation associated with the lockdown may have initiated Ina’s new direction, but in doing so, the young singer moved into a new direction.

“Who am I, what am I doing here,” she seems to ask us in every song. She no longer relies on formulas that have worked for the last 50 years but trusts in her very own vocabulary in her atmospheric big city songs; sometimes in the shrill neon light, sometimes in the twilight of the nightshade.

“I look for melodies that are as soulful and organic as possible,” says Ina. “On the new album, for the first time, I wrote the music by myself. The pandemic suddenly left me with no other option. On my earlier albums I wrote the lyrics and my vocal melody but left it to the other musicians to write their parts around my idea. This time I had to do all this alone. I produced my own demos, learned to play the piano, and even developed some of the arrangements for horns and backup vocals. It was a big challenge for me to write all the material on this album, but along the way, I finally found out what kind of music suits me.”

In the journey to finding her true self, Ina discovered versions of her own personality. An album is usually the mirror of the respective performer. On the new album, Ina goes much further. The new album is a kaleidoscope with many colours, shapes, timbres, and references.

To compose her songs, she based them on stories from her own life. She describes All There Is, “a love album,” but it also depicts the different circumstances of an independent artistic personality. “Even behind the greatest love stories there is usually a struggle,” says Ina. “In some songs I tell how people fight together and then find their way to happiness. The two main aspects of this record are about life-changing love and life-changing struggles.”

Like any great storyteller, Ina always finds an outlet for her characters in her songs. Listening to Ina’s music is almost like she is learning about life, but in the most entertaining way. At the same time, she finds new appointments between past and present in every song. She makes no secret of her commitment to old school soul and jazz.

The album’s instrumentation, mix and sonic environment may indeed be very Sixties, and that’s exactly how it’s meant to be. But thanks to Ina’s incredible presence in every single syllable that she sings, which is also expressed in her arrangements, this journey does not lead straight into the past, but always explores the sixties and seventies through the window of the present.

“I write my songs as intuitively as possible,” explains Ina. “When I sit down to write a song, I don’t think about what Aretha Franklin’s or Dusty Springfield’s producer would do but write down what comes to mind as a Finnish girl in Berlin.”

Life is complex and what we perceive as a moment is nothing more than a gondola on the cable car between the past and the future. Ina’s songs take us back to our memory and, through the power of her voice and imagination, carry us towards our hopes and expectations. An album about and for life in its endless creative diversity.

ALL THERE IS: – TRACK LISTING

ALBUM TRACK BY TRACK
Love Me
Start of the whole storyline, the album’s main single ‘Love Me’ was written around the feeling of saying “I love you” for the first time. The up-tempo rhythm and old school arrangements will move your feet, yet the composition’s blue mood will make your soul shiver. The song is an emotional rollercoaster in the best way possible

Don’t Lose Today
The instruments on this song will take you back to the golden days of Motown, as Ina’s storytelling is bringing you back to this modern day, and the difficulties of living in it.

All There Is
Album’s title song that ties the whole album theme together with a simple message; Love is all there is. That’s it.

We Could Be Gold Diggers
Ever got tired of being broke and dreamt about hitting the jackpot with your lover, and living lavishly for the rest of your life? Well, this is what that dream sounds like.

Poor Heart
Poor Heart is the ultimate peak, the mountain top of the first half of the album. This song is a true power trip that could fill up movie theaters on an epic fighting scene. Song about resilience, perseverance, fighting your inner demons and beating their asses.

One Night In Berlin
The second act of the album starts with this sweet and acoustic dream of a song. Ina surprises with hauntingly soft vocals as she sings through the biggest love story of her life.

Promises
Piano ballad that will break your heart in the sweetest way. Cinematic composition together with a deep storyline of a lost friendship. How could you keep a promise you never made?

Dive
Every album needs the odd bird, and these songs will surely take that place. We take a deep dive into a deserted island in the middle of the sea, where two lovers have a decision of a lifetime to make; Will they dive deeper than ever before, or drown while trying?

April Song
We are back with the Motown sound with this new soul classic. A true mood booster that will make you feel those first sun rays of Spring no matter the season.

Raw Honey
The last song will take you on a powerful journey of painful self-awareness, growing pains and finding hope in a difficult situation. This song will give you everything; horns, back-up vocals, strings, storytelling, and of course; Ina belting her heart out like it’s the last song she’ll ever sing.