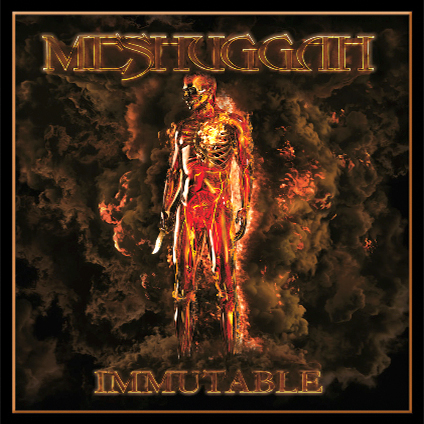 Meshuggah premiers a new video for their song “Broken Cog” today on YouTube! It’s the opening track on the band’s critically praised new record, “Immutable”, released today by Atomic Fire and available now on all streaming platforms and for purchase: https://meshuggah.afr.link/immutable

This year’s most significant lesson has been to expect the unexpected, which also applied to the release of the long-awaited Meshuggah album as the most anticipated album of 2022.

Meshuggah have always been way ahead of the game and plainly without peer.

Six years on from the band’s most recent full-length, “The Violent Sleep Of Reason”, 2022 brings a fresh and fearsome revelation from Meshuggah. Shattering even the highest of expectations, the band’s ninth album “Immutable” showcases just how far ahead of the pack the band continues to be.

The album is a significant departure from the relentless riffing and monochrome churn of “Koloss” or “The Violent Sleep Of Reason”. With vocalist Jens Kidman recording his own vocals in his home studio and lead guitarist Fredrik Thordendal manifesting his solos at his own Studio 33, “Immutable” is a true team effort and another triumph of resourcefulness and meticulous attention to detail. Meshuggah had never felt more inspired when they found themselves in a new environment at Studio Sweetspot. “Dick pitched Sweetspot to us,” Mårten recalls. “They have lots of experience but mainly with other types of music. It was out in the sticks, in a big shed in the middle of a field! We had no tours going on, and we rented a tour bus for cheap. We drove it down there, and we lived in that. So basically, we went on tour to record the album [Laughs], and we worked our brains into pieces! But it was also really free. We went for comfort and quality and a working situation where we didn’t feel stressed at all. That was awesome, and the strongest parts of this album are because of that.” As Mårten Hagström explained earlier, fans should prepare themselves for the unexpected. “This album is more melodic. It’s longer, and in my opinion, it’s more dynamic than most of our albums,” he states.

Gifted with the opportunity to spend more time than ever on the fine details of their new material, the Swedes have effectively reconstructed their trademark sound on “Immutable”, imbuing every last moment of this epic record with irresistible power and ingenuity. “We wanted to go for air and for dynamics, and lo and behold, that actually makes it sound way more like a band, from my perspective,” says Mårten. Destined to be one of 2022’s most hailed and talked-about releases, “Immutable” once again showcases Meshuggah’s collective brilliance, including some of the most jaw-dropping ensemble performances they have ever executed.

Immutable. “The title fits perfectly for where we are as a band,” Mårten concludes. “Even though we’ve been experimenting all along, I also think we’ve been the same since day one. The way we approach things and why we still make new albums, and why we still sound the way we do, it’s immutable. Humanity is immutable, too. We commit the same mistakes over and over. And we are immutable. We do what we do, and we don’t change.”

“Immutable” is available as CD, exclusive super deluxe liquid vinyl, nine limited vinyl colors, cassette, or merchandise here https://meshuggah.afr.link/immutable. For up to the minute updates on Meshuggah, sign up for email news at https://immutable.se

12. Armies Of The Preposterous